A warm welcome to MY CIRCUS. A member’s area for all friends of Saalbach Hinterglemm Leogang Fieberbrunn.
Login
Registration
Share with friends now!
Top Services
You are here:

The Schloss Ritzen Museum in Saalfelden is one of the four remaining palaces in Saalfelden. Saalfelden is surrounded by a number of old noble residences, namely the palaces of Lichtenberg, Dorfheim, Farmach and Ritzen (which used to go by the name of “Grub”!). The Ramseider Turm tower and the moated palace at Rettenwörth have been lost to the ages. The earliest mention of “Grub” near Saalfelden dates back to the year 1339. In 1964, the complex was acquired by the municipality of Saalfelden and handed over to the museum association.
As below
Museumsplatz 1, 5760 Saalfelden
11:00
17:00
The museum opening times are as follows – January, February, May, October and December: Thursday to Sunday from 11:00–17:00. June, July, August and September: Tuesday to Sunday from 11:00–17:00. March, April and 1–25 November inclusive: closed.  From 24.12 - 06.01. daily opened. The cash desk closes at 16:00.
Address

Run by the municipality of Saalfelden

The Schloss Ritzen Museum in Saalfelden is home to one of the largest collections of cribs in Austria – and one of the most significant in terms of folklore. An instrumental figure in establishing and shaping the collection was the local crib builder Alexander “Xandi” Schläffer (Saalfelden, 1899–1984), whose reputation extended far beyond the borders of Austria. His efforts to build up the collection helped ensure that unique box cribs and decorations, some of which date back to the 18th century, were preserved. This uniquely rich and varied collection documents the crib traditions of this region through the centuries.

The earliest mention of what was to become Schloss Ritzen dates back to the year 1339, where it was referred to as the “Grub” near Saalfelden. In 1603, it entered into the possession of Haimeram von Ritz, who subsequently lent his name to the tower and the new palace that is believed to have been completed in 1593. Today, it consists only of a side wing belonging to the original complex. Schloss Ritzen was acquired in 1968 by the then-municipality of Saalfelden, which enabled it to be preserved. It has since become the site of the Schloss Ritzen Museum, with Xandi Schläffer its first curator. The palace originally comprised a small castle complex and was extended to include four corner towers in around 1800. 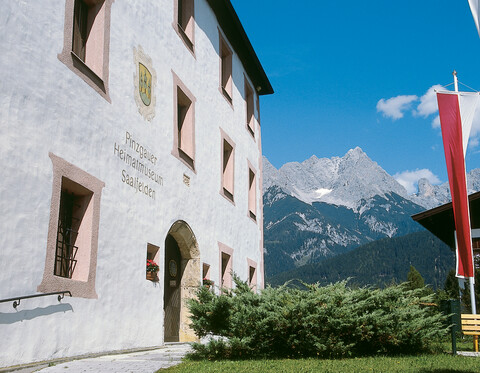